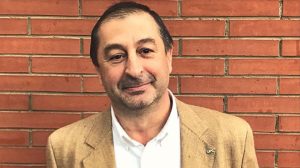 Francesc Torres was born in Ibiza, Spain, in 1962. He received the Ingeniero and Doctor Ingeniero degrees in Telecommunication Engineering from the Universitat Politècnica de Catalunya (UPC), Barcelona, Spain, in 1988 and 1992, respectively. From 1988 to 1989 he was a Research Assistant in the RF System Division at the European Space Agency in Holland, devoted to microwave device testing and modelling. Currently, he is at the Remote Sensing Laboratory (UPC), as assistant professor on microwave circuits and systems from 1989 to 1996, and as associate professor since 1996. From 2005 to 2006 he held a sabbatical stage in the Microwave Systems Section of the Jet Propulsion Laboratory, Pasadena, CA, involved in the GeoSTAR pilot project, a passive microwave interferometric geosounder. Since 1995 he has participated in a number of projects related to the SMOS mission by the European Space Agency. He is currently co-leading the Barcelona SMOS Expert Centre on Radiometric Calibration and Ocean Salinity.